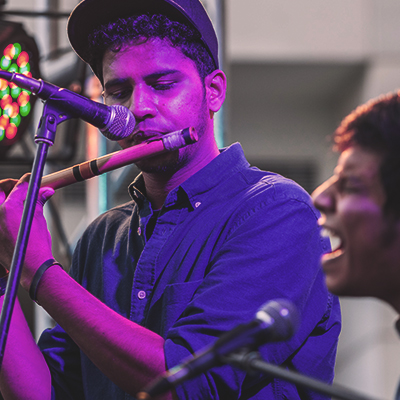 Artists and bands have been shortlisted by an international jury to participate in the 2019 Indie100 Program, which features a line-up of practical workshops, recording sessions, industry feedback and network opportunities at XChange Sessions 2019.

What opportunities will the selected bands be entitled to?

- Artists will have the opportunity for a Showcase onstage at XChange Sessions 2018 and receive valuable industry and music expert feedback
- Bands will have their material recorded in a state-of-the-art facility, fully equipped, high-end recording suite at the KM Music Conservatory, Chennai
- Selected bands will be produced, recorded, mixed and mastered by top Australian and Indian music producers
- The recorded and mastered tracks will be posted to Bandcamp
- The tracks will be released for worldwide distribution, with copyrights remaining exclusively with the artists